With almost identical looks with iPhone 6 but better design, iPhone 7 entered the market with a bang. Even though it is stronger than the iPhone 6 (which is prone to bending), water resistant, and with improved home button, it is not flawless. There are rapid cases of users reporting touch disease in iPhone 7 and iPhone 7 plus.

Touch disease in iPhone 7 and iPhone 7 Plus causes the touchscreen to become unresponsive due to failure in connection of touch controller chip with the logic board.

If you accidentally drop your phone on a hard surface, there is a possibility that the connection of logic board with the touch controller chip is disfigured.

Don’t panic! It doesn’t happen always. To check whether your phone is having the touch disease, read on! 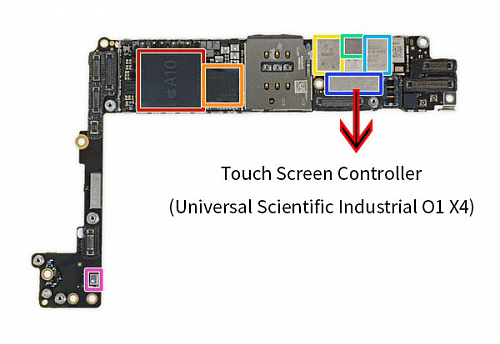 Above is the picture of a bare logic board of iPhone 7. The blue highlighted area is the touch controller chip which is responsible for the touch screen to function properly.

At iPhoneBits, we have expertise in fixing such issues.